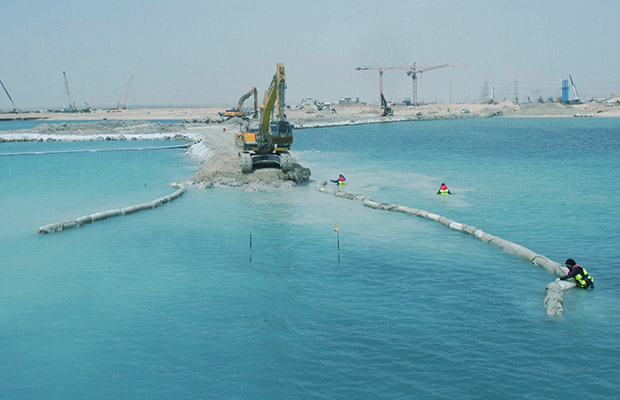 The proliferation of the technology has been constant: from the construction of the first desalination plant on a large scale in 1965 in Coalinga, California, to today’s  more than 20,000 such plants that serve more than 300 million people across the globe, according to the International Desalination Association (IDA).

The biggest concentration of desalination plants is found in the Gulf region, where water scarcity is a fact of life and could pose as an obstacle to growth. Saudi Arabia, for example, produces a fifth of the potable water extracted from the sea in the world. It has an advantage in that it can rely on low energy costs to make the plants run.

Desalination is also being used in places other than the desert, especially cities, where their growth has resulted in a reduction in traditional water supplies. One third of the water used in Melbourne, Australia, comes from a desalination plant. Completed in 2017 at a cost of $3.5 billion, the plant was deemed a crucial investment because the city had been receiving below-average rainfall for 18 of the last 20 years.

The largest desalination plant in North America is located in San Diego, California, providing for about 10% of the water needs of its 3.1 million inhabitants. «Drought is a recurring condition here in California», Jeremy Crutchfield, water resources manager at the San Diego County Water Authority, said in an article that appeared in the U.S. magazine Wired in June. «We just came out of a five-year drought in 2017. The plant has reduced our reliance on imported supplies, which is challenging at times here in California. So it’s a component for reliability». Southern California depends on the distant Colorado River for 50% of its water needs and the state is trying to reduce that dependence because drought has greatly depleted the river. It is looking at adding 11 plants to the 10 already in operation. Desalination is even more crucial for Israel, where more than half of the water consumed comes from five plants. The construction of another five is being studied. In Saudi Arabia, a desalination plant in Shuaibah on the western coast of the kingdom recently inaugurated by Fisia Italimpianti uses reverse osmosis technology to produce 250,000 cubic metres a day of potable water. It will serve more than one million residents in the nearby cities of Mecca, Jeddah and Taif.

This growing reliance on desalination has increased the need for a cheaper and greener way to build and operate the plants. According to the IDA Water Security Handbook, published by the International Desalination Association and Global Water Intelligence in January, 90% of the production capacity of desalination plants built since 2010 uses membrane technology. The remainder uses thermal technology, especially in the Gulf. The predominance of membrane technology has resulted in most of the research and development being concentrated in this area.

MIT News, the online magazine of the Massachusetts Institute of Technology, published in February an article on a process developed by MIT researchers that overcomes one of the main problems with desalination: the disposal of the waste produced by the plants, otherwise known as concentrated brine, composed of a strong concentration of salts. Every day, the world produces about 100 billion litres of water from desalination, resulting in a similar mass in terms of concentrated brine. Their disposal at sea is done at a considerable cost in terms of energy. It also has to be done carefully under close supervision to avoid putting the environment at risk. What the researchers have done is to use the brine to extract chemicals such as sodium hydroxide and hydrochloric acid. Since these chemicals are used by desalination plants, they can be recycled, leading to lower operation costs and a diminished impact on the environment. Also known as caustic soda, sodium hydroxide can pre-treat seawater to change its acidity and prevent damage to the membranes used at those plants that deploy reverse osmosis technology. Hydrochloric acid can clean machine parts, among things. «Environmentally safe discharge of brine is manageable with current technology, but it’s much better to recover resources from the brine and reduce the amount of brine released», says John Lienhard, professor of mechanical engineering at MIT.

Another way to reduce production costs and minimise the impact on the seas and oceans is the use of brackish water. It contains a 10th of solid elements compared to saltwater, making the production process much cheaper. In Texas, there are 49 desalination plants that process brackish water extracted from both above and below ground. In San Antonio, the largest brackish water treatment plant in the United States is under construction. In its first phase, the plant - known as H2Oaks - produces more than 45 million litres per day, enough for about 40,000 families. By 2026, it will produce 113 million litres per day.

Desalination powered by renewable sources of energy is becoming an important feature because it can provide potable water at competitive prices, reduce the use of fossil fuels and cut back on CO2 emissions.

Desalination is becoming increasingly important also in the industrial sector. Water scarcity, corporate social responsibility and environmental sustainability are favouring an increasingly massive adoption of desalination and reuse technology in the sector. «Removing dissolved salts from water and other technologies, which turns low-quality wastewater and raw water sources into high-quality process water, will be an important driver of industrial efficiency moving forward», said Devesh Sharma, director of IDA and managing director of Aquatech, a water purification technology company.

Desalination, after years of slow but steady growth, is experiencing a moment of development due to its ability to give a response to water scarcity according to the principles of the circular economy.