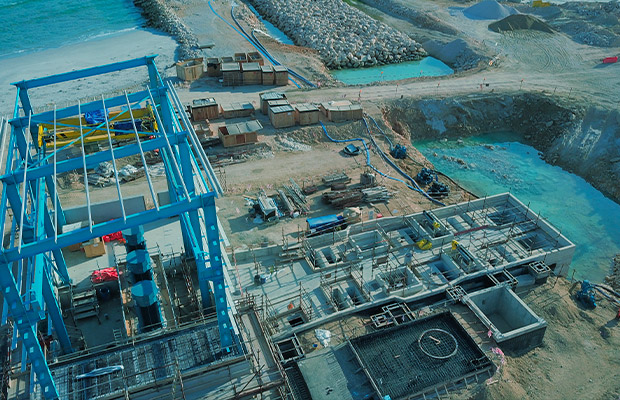 Although only 1% of the world's population is totally dependent on water from desalination plants for domestic use, the percentage is set to grow quickly as demand for the precious resource increases in regions such as Asia and the Middle East, according to a recently published study by Adroit Market Research, an Indian consulting firm.

The United Nations, in fact, foresees more than 14% of the world population facing water scarcity by 2025, it says.

«Water desalination market by source is bifurcated into seawater and brackish water», the study explains. «(And) sea water holds the major market share in 2018 and it is expected to drive the water desalination industry over the coming years».

And reverse osmosis, a process that uses membranes to purify water, will remain the dominant technology to satisfy this expected heightened demand for desalination plants. «Reverse Osmosis technique is widely adopted by the industries and municipalities for seawater treatment», it says.

Having spent an estimated $8.6 billion in 2019, the Middle East is the region with the highest investment rate in water desalination. But the Asia-Pacific is seen having the highest growth rate in the market, equal to 10% per year.

The need to invest in desalination is becoming all the more urgent as the gap between the availability of water and the demand for it for domestic and industrial uses is expected to widen to 40% by 2030, the study says. The reasons are multiple: population increase, reduced supply of fresh water, industrialisation, greater public awareness of the need to protect water sources and the introduction of stricter laws for water treatment.

For example, the number of people living in regions that suffer from severe water stress is expected to increase by 1 billion to reach 3.9 billion, nearly half of the world’s expected population of 8.1 billion by 2030.

Having enjoyed a market share of 55% in 2019, reverse osmosis is bound to remain the leading technology for the coming years, with an annual growth rate of 10.6% as demand for large-scale desalination plants increases.

The Middle East and Africa are the regions that are poorest in fresh water, having only 1% of the estimated total in the world. Alongside desalination, there is also the treatment of wastewater. Dedicated plants treat 43% of wastewater, the highest rate among developing countries, such as Algeria, Libya, Morocco and Egypt. «This region possesses the maximum opportunities for reuse and recycling of wastewater but only a few countries such as Algeria, Libya, Morocco and Egypt in the North Africa have successfully implemented wastewater reuse and treatment programs».

In the Asia-Pacific, China and India are the drivers of the desalination market, while Japan and South Korea lead in wastewater treatment. Industrial pollution in China and India, with the pouring of waste in rivers and other water bodies, is spurring investment in water recycling and other measures to reduce the trend. «Due to a rapid increase in population, people have less access to clean drinking water, especially in rural areas».

Examples of desalination plants helping alleviate endemic drought are numerous. In South Africa, Cape Town has historically struggled with a lack of water. In 2018, the Koeberg nuclear power plant run by the Eskom public utility launched a mobile groundwater desalination plant to meet its needs while avoiding taking it from the city residents.

Salini Impregilo and Fisia Italimpianti are contributing to improve the lives of 14 million people thanks to water purification, desalination, water treatment and water pollution reduction projects under construction.