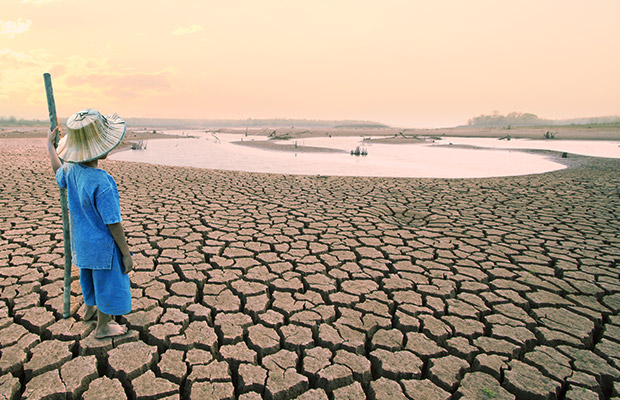 Water lies at the heart of climate change initiatives

Water is the main driver behind the effects of climate change: 90% of disasters are caused by floods, storms, droughts and other weather events. The situation is expected to worsen in the coming years due to population growth, rapid urbanisation and industrialisation. By 2050, up to 5.7 billion people are seen living in areas suffering from water scarcity for at least one month a year. The rise in the level of seas and oceans and the growing number of extreme weather events related to water - such as violent sea storms - could also force hundreds of millions of people to leave their homes along the coast. The cost for these coastal areas could exceed $1 trillion each year by 2050. Climate change could also push more than 100 million people in developing countries below the poverty line by 2030.

At the Climate Action Summit, held at the United Nations in New York in September, water was obviously at the centre of many initiatives discussed to guarantee a future for our planet.

Drought is one of the first consequences of climate change. Speaking at the summit, Indian Prime Minister Narendra Modi, speaking at the event, said India will spend $50 billion during the next few years on water management under the umbrella of the Jal Jeevan Mission. The goal is to offer by 2024 between 43 and 55 litres of drinking water to every Indian family. Investments will be directed towards water conservation, rainwater harvesting and the development of water resources. Currently, only half of Indian families have access to drinking water.

Modi also called on member states of the United Nations to join the Coalition for Disaster Resilient Infrastructure, which aims to encourage the adoption of infrastructure capable of withstanding severe weather events caused in large part by climate change. «Our urban environment is increasingly threatened by extreme weather events. Over two-thirds of economic losses are caused by infrastructure damage. Seven million people have been displaced only this year because of the cyclones that devastated cities and homes in the Bahamas, India and Mozambique. The lack of a resilient and risk-preventing infrastructure causes the loss of lives, homes and livelihoods», said Mami Mizutori, Special Representative of the United Nations Secretary-General for Risk Reduction, during an interview of presentation of the initiative.

Oceans figured large at the summit. Action to limit climate change involving them could indeed provide up to 21% of the emission reductions needed to limit warming to no more than 1.5 degrees Celsius by 2050. This would translate into a reduction of 11.8 giga tonnes of carbon dioxide equivalent, or CO2e - the standard unit used to measure the impact of greenhouse gases in relation to the effects of CO2. This figure is higher than the current emissions of all coal-fired power plants worldwide, as indicated in a scientific report entitled "The Ocean as a Solution for Climate Change: 5 Opportunities for Action" and presented at the summit. The report, produced by the High Level Panel for a Sustainable Ocean Economy - a group of 14 heads of state and government supported by scientists and industry experts - provides the first quantitative analysis on the role of the oceans in the fight against climate change.

Here are the main areas where interventions can done, according to the report:

Norway and Palau, two countries whose resources largely depend on the ocean, represented respectively by Prime Minister Erna Solberg and President Tommy Remengesau, head the High Level Panel for a Sustainable Ocean Economy. They issued an opinion piece published on the website of CNN television news channel, stating: «Until now, our ocean has played a relatively minor role in national climate plans and strategies. The actions outlined in our new report offer exciting new opportunities to fight the climate crisis. All governments should incorporate ocean-based solutions in their national climate commitments in 2020, and in their actions to meet the Sustainable Development Goals. Let's pull together and seize this opportunity to save our climate by transforming the way we interact with our ocean».

With technology able to turn water into an engine of a circular economy, it is not too late to put it to work.