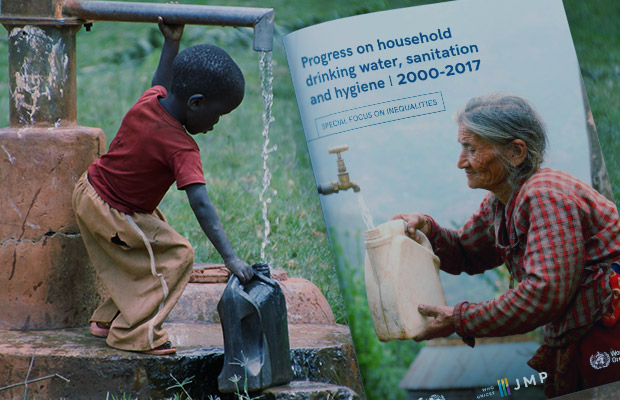 More people in the world are able to get water to quench their thirst, cook their meals and wash their clothes than any other time in history.

But more needs to be done.

Although the world has made notable progress in improving access to drinking water for billions since the start of the century, many countries still have a lot to do before this fundamental right becomes universal, says a new report by the United Nations (UN).

Thanks to government policy and investment to reduce inequality in this area, the percentage of the population with access to even the most minimum of drinking water services has increased by eight percentage points between 2000 and 2017, according to the report published by the Joint Monitoring Programme for Water Supply, Sanitation and Hygiene (JMP) run by the World Health Organization (WHO) and United Nations Children’s Fund (UNICEF).

The report is the latest in a series that reveal the progress of international efforts to achieve the 17 Sustainable Development Goals set out by the UN for 2030. In this case, the goal is universal and equitable access to safe and affordable water to drink, wash and clean.

In 2017, 6.8 billion or 90% of the world’s population had access to what the report describes as «basic drinking water services», meaning, as a minimum, protected drinking water sources that take less than a 30-minute round trip for people to reach. These sources, known as improved water sources, include piped water, boreholes or tube wells, protected dug wells, protected springs, and packaged or delivered water. The figure compares with 5.0 billion or 82% of the world’s population in 2000.

Although the improvement is notable, the rate of growth is not fast enough to allow for the world to reach the 2030 goal, according to the report. «If current trends continue, global coverage will be around 96% in 2030, falling short of universal access».

Meanwhile, the report says the gap between urban and rural dwellers had also narrowed by 10 percentage points during the period, mostly due to improvements in rural areas. Urban coverage of «at least basic drinking water services» increased slightly from 95% to 97%, whereas rural coverage increased from 69% to 81%.

Geographically, improvements were recorded in all the regions monitored by the programme. «The greatest increase was recorded in Sub-Sahara Africa, where a quarter of the current population has gained access to at least basic drinking water since 2000», it says. This region saw it go up by 15 percentage points, leading to 61% of the population using «at least basic drinking water services» by 2017. In other words, 328 million people in Sub-Sahara Africa had gained access to these services since 2000.

Oceania had the slowest improvement, up three percentage points with a mere 55% of the population using «at least basic drinking water services» in 2017, the lowest result of all the regions.

However, these three regions are also where most of the world’s people who lack even the most basic services live. They are home to nine out of 10 of the 785 million people who still use what the programme calls “limited services”, “unimproved sources” or – the worst category of all -  “surface water”. More specifically: 400 million in Sub-Sahara Africa, 161 million in Eastern and South-Eastern Asia and 145 million in Central and South Asia.

Another statistic highlights the plight of those who live in Sub-Sahara Africa: it is where more than half of the 144 million people who still collect water from rivers, lakes and ponds live. Drawing water in this way is the most basic and dangerous among all of the ways categorised by the programme.

The best achievement for any country is the ability to provide what the report calls «safely managed drinking waters services», meaning drinking water from an improved water source that is located on premises, available when needed, and free from faecal and priority chemical contamination. The people who enjoyed access to these services lived in the most developed parts of the world such as Europe and North America.