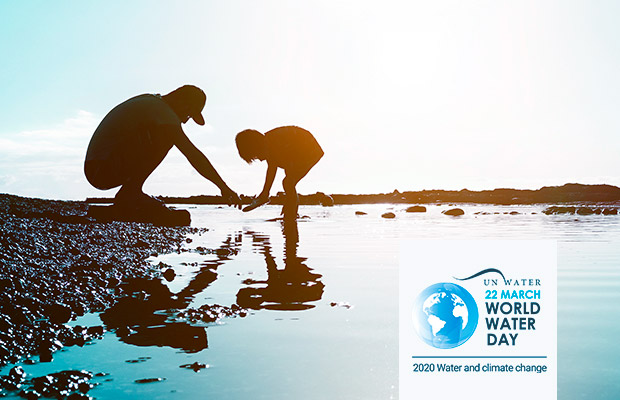 Water and Climate Change: The Key to Safeguarding the Planet

Now is the time to act. Because water and climate change are closely interconnected, with the infrastructure that manages this precious resource playing a fundamental role in preserving our future on this planet.

On March 22, in conjunction with the annual World Water Day, the United Nations published a report entitled "Water and Climate Change", describing the impact of climate change on water infrastructure and proposing solutions to manage it.

Floods and extreme rainfall have increased by more than 50% across the globe this decade, and they are occurring four times faster than the rate recorded in 1980. Other extreme weather events such as storms, droughts and heat waves have also increased, up by more than a third. And they are occurring twice more frequently than they did in 1980. These phenomena increase the risk of damage that they can cause to water supplies and their distribution channels. They can also provoke floods to wastewater treatment plants and prevent the outflow of urban drainage systems.

Many countries, including the most developed ones, rely on obsolete infrastructure that was designed and built to handle weather at regular or predictable intervals and at foreseen intensities. In the United Kingdom, for example, 75% of urban water networks are more than 100 years old. This makes them vulnerable to the damaging effects of climate change. What makes this situation even more critical is their importance to personal hygiene, as the recent dramatic events related to the COVID-19 pandemic show.

Global warming will favour the worsening of water quality due to the greater spread of harmful algae. Many lakes and estuaries around the world that supply drinking water to millions of people are already victims of toxic blooms. In China, more than 60% of lakes suffer from eutrophication: the enrichment of water in nutrient salts that causes structural changes in the ecosystem, the depletion of fish species and the general degradation of water quality. In addition, more than 80% of wastewater is released into the environment without first having their organic materials get properly treated at a plant. This is a major source of harmful gas emissions.

So these phenomena call for urgent action to build, upgrade and protect the infrastructure that treats water and distributes it.

Water and energy infrastructure must work together to reduce the impact of climate change. The water sector uses electricity to extract (40% of the total use), distribute (25%) and treat (20%) water and wastewater. Its consumption of electricity represents about 4% of production global electricity. An increase in the efficient use of water, a reduction in waste and consumption as well as the use of alternative energy sources would lead to a reduction in energy consumption and the emission of greenhouse gases. It has been estimated that the water sector could reduce its global energy consumption by 15% by 2040.

The report suggests that "unconventional" water resources, produced without affecting fresh water reserves and with low energy consumption, are increasingly being considered. Wastewater treatment is a reliable alternative to conventional water resources for a range of civil and industrial uses. It produces a double benefit: it reduces the amount of energy necessary for the extraction and use of water and the emission of harmful gases into the atmosphere. The biogas produced by wastewater treatment processes can be recovered and used to power treatment plants themselves, making it neutral from an energy point of view and further improving energy savings.

Desalination can increase the supply of fresh water and reduce the climate impact if it uses alternative energy sources. It has been estimated that in 2030 the use of sources such as solar panels and wind turbines help reduce by 50% water withdrawals in the United Kingdom, more than 25% in the United States, Germany and Australia and more than 10% in India.